As a professional and academic, I am a data scientist with an interest in the languages, linguistics, cultures and civilizations of ancient civilizations.

As a data scientist, I am well versed in many databases but I am most broadly versed in Microsoft SQL Server, PostgreSQL, and Microsoft Access. I have a lot of interest in data architecture, data analysis, data visualization, big data, and business intelligence. I have been working with databases for about 15 years now but I'm just beginning Microsoft's certification process and aspire to be a Microsoft MVP within 4 years.

As an academic, I have a masters degree in Classical Studies from the University of New Mexico. I am well versed (as there is no such thing as fluency in unspoken languages) in Latin, Ancient Greek, German, and Spanish, and general Linguistics. I have some experience with Sanskrit and Old Irish. I taught Latin and Greek Mythology for four years at the university level and I copy-edited Disce! An Introductory Latin Course (volumes 1 & 2 and the workbooks) for Pearson. I run a free online Latin dictionary called Numen - The Latin Lexicon.


Goal of this Blog 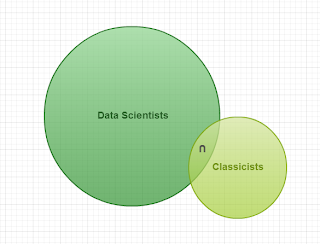 I'm a technologically savvy guy but I've always felt that I consume far more content on the internet than I produce. When I was an instructor at UNM, I received great joy and satisfaction watching people learn new skills. My goal with this blog is to recapture those feelings and to give back to the community of both data scientists and Classicists. I realize that the Venn diagram's intersection between the two is quite small but hopefully I can produce some content that will interest both groups while at the same time I hope that it will elate that intersection of individuals who fall into that small slice.

I hope to post once per day mostly on the things that I'm learning. More realistically, I intend to post once to twice per week.

So thanks for stopping by and I hope you'll find your way here again someday!
Posted by Keith Alexander W. at 11:22 AM